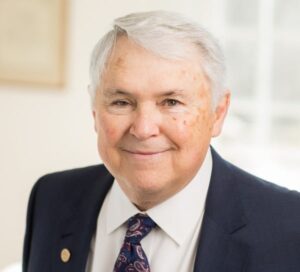 JANUARY 29, 2019 – MacElree Harvey is pleased to announce that Judge Ronald C. Nagle has joined the firm as Of Counsel, after retiring as Judge of the Court of Common Pleas of Chester County. Prior to assuming the Bench, he was engaged in the general practice of law in Chester County.

Born and raised in West Chester, Judge Nagle is a graduate of Saint Joseph’s University (B.S., 1962), and the Temple University School of Law (J.D., 1965). He was admitted to the Bar of the Pennsylvania Supreme Court in November 1965. Following service with the United States Department of Justice, in the Fall of 1969, he co-founded the law firm of Buckley & Nagle, where he remained in private practice until his appointment to the Bench of the Chester County Court of Common Pleas on February 9, 2005. He was subsequently elected to a ten-year term on the Court, where he served as a trial judge until his retirement on December 31, 2018. He previously served in various capacities with the Court, including Law Clerk to the Honorable Thomas C. Gawthrop, President Judge of the Chester County of Common Pleas, the Court’s Juvenile Court Master and its Mental Health Hearing Officer.

During his years as a practitioner, he handled a wide variety of civil and criminal cases, eventually concentrating his practice in municipal, land use and zoning law, real estate acquisition and development, eminent domain, representation of municipal and county governments, zoning hearing boards and municipal authorities, and private individuals and estates, including litigation related to these areas at both the trial and appellate court levels. He was active in various community charitable organizations, including serving as a long-term Board Member and President (1979-1980) of Handi-Crafters, an organization founded in 1961 to provide a continuum of services to support the needs of individuals who are developmentally disabled, and was a founder and past president of the Handi-Crafters Foundation. He was a twenty-year member of the Westtown Township Zoning Hearing Board before assuming the Bench.