The November 3rd general election is just a month away, and while the impact of the COVID-19 pandemic is likely to dominate the fiscal policy debate this election cycle, each presidential candidate has also introduced a number of competing tax proposals. The outcome of this election therefore has the potential to shape the tax code for both businesses and individuals for years to come. Although it is impossible to predict what will happen this November, we are carefully monitoring the proposed tax law changes and are ready to implement a number of tax-planning strategies tailored to your specific needs. Key elements of the candidates’ tax proposals are outlined below.

– Repeal the TCJA’s individual income tax cuts for taxpayers with income above $400,000 (i.e. back to the 39.6% tax rate). Cap the value of itemized deductions to 28%. Tax capital gains and dividends at the same rate as ordinary income for taxpayers with over $1,000,000 in income.
– Raise the corporate income tax rate from 21% to 28%.
– lnstitute a 15% alternative minimum tax on corporations with $100 million or more in profits.
– Raise the Global lntangible Low Tax lncome (‘GlLTl’) (a tax on income from foreign affiliates, including foreign-held intangible property and its related income) rate from 10.5% to 21%.
– Eliminate the automatic step-up in basis and tax unrealized capital gains at death. (We also assume that Biden would mandate the Federal Estate and Gifi Tax Exemption to o return to a pre-TCJA base of $5 million per individual.)
– lnstitute a 12.4% Social Security payroll tax, to be split between employers and employees, on income earned in excess of $400,000.
– Raise the Child Tax Credit, expand the Earned lncome Tax Credit, and enact new tax credits for certain family caregivers, first-time home buyers, and renters.
– Exclude forgiven student loan debt from taxable income.

President Trump has generally expressed his intent to cut taxes and to preserve and expand on the TCJA, which includes the following proposals:

– Keep the top 37% tax rate right as is. ln addition, implement a 10% rate cut for middle- income taxpayers, effectively lowering the 22% rate to 15%.
– Make the TCJA changes for itemized deductions and the higher basic standard deduction permanent.
– Reduce tax rates for capital gains, index gains for inflation, and create a capital gains tax holiday for a limited time.
– Require a Social Security number for taxpayers to be eligible for the Child tax Credit or Dependent Credit.
– Enact the Education Freedom Scholarship tax credit, which would provide up to $5 billion worth of income tax credits annually for individual and corporate donations to state-identified not-for-profit scholarship-granting organizations.
– Preserve the current corporate tax rates under the TCJA.
– Preserve the higher Estate and Gift Tax Exemption and keep the current rules relating to the step-up in basis.
– The President recently issued an executive order that postpones Social Security tax for employees for September 1 through the end of 2020. He has said that this relief could turn into a permanent extension.

Ultimately, the outlook for legislative action in 2021 on tax proposals will depend on who is elected president and which party controls the House and Senate. Trying to guess how and when the tax code will change and planning for those changes now is an impossible task. Still, taxpayers should keep these proposals in mind when considering selling property, engaging in family tax and estate planning, or making business and investment decisions. We are constantly monitoring these proposed changes and are prepared to assist you regardless of what happens this November. 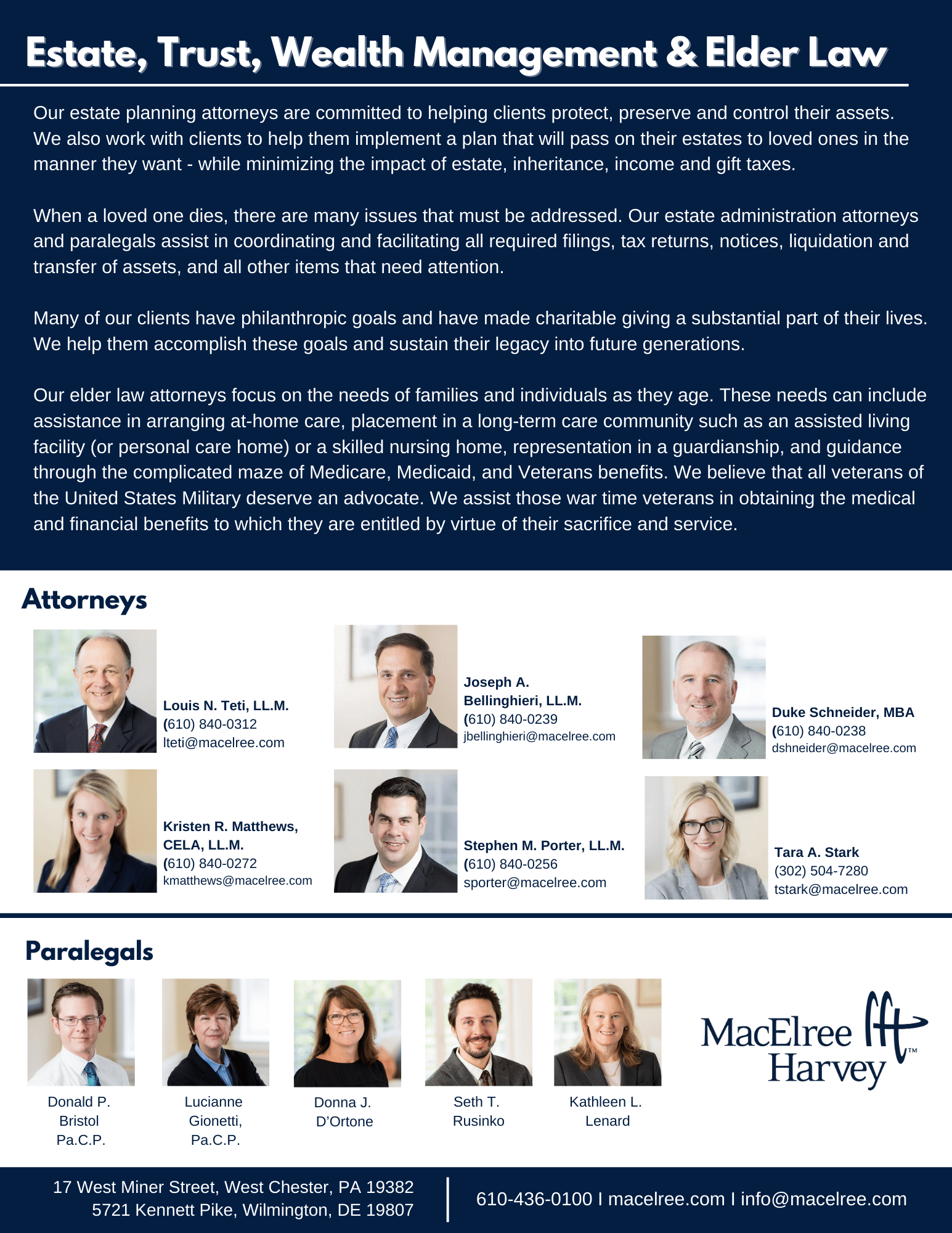 « 11 MacElree Harvey Attorneys Named to The Best Lawyers in America© 2021
Subject to Cross Episode 17: The State of the Supreme Court Post RBG »