There are times when developers and landowners feel they are being unreasonably leaned on to make concessions or contributions to municipalities in exchange for subdivision and land development approvals. Some officials seem to think that, so long as they receive no personal benefit, they can ask for the moon. In a surprising recent decision, the Supreme Court ruled there are limits on such requests, which, in one case, crossed the boundary into a criminal bribery conviction.

In 2003, the 209 acre former Haverford State Hospital site was put up for sale by the Board of Commissioners of Haverford Township. Two commissioners negotiated an agreement of sale with a developer, Goldenberg-Pohlig (GP) to purchase the land for $30.65 million for 61 acres of the parcel. Initially, GP was to develop the land with residential properties and build six ball fields. After problems came to light with this plan, a new agreement was tentatively negotiated in November of 2005 for sale of 38 acres for $17 million to be developed by GP for “age-targeted” residential units. 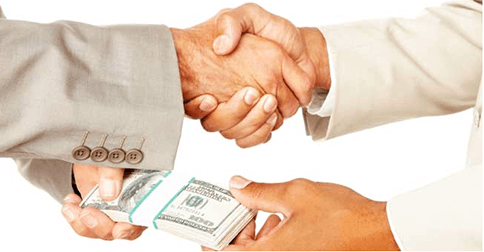 In the next month, December 2005, the Township had a special meeting to address a looming revenue shortfall. Commissioner Fred Charles Moran proposed accelerating collection of real estate taxes to meet the shortfall. Moran particularly proposed that GP pre-pay $500,000 in real estate taxes on the 38 acre part of the former state hospital tract. When asked why GP would consider pre-paying taxes, Moran reportedly said, “Well, maybe they want to accelerate this process, get it moving.”

The next day, Moran and Commissioner Andrew Lewis called one of the principals of GP and said “call it extortion, call it what you will. We need $500,000, and we’ll accelerate the zoning. We’ll get you the zoning approvals you need and accelerate the process.” GP asked if the $500,000 was included in the purchase price, and Moran indicated it would be added to the purchase price. The next day, Commissioner Lewis, by himself, called the GP principal again and said: “I want no part of that conversation. Haverford Township is not in the business of selling zoning.”

GP never formally responded to the offer, and the purchase price remained the same. An agreement of sale was not finalized until April of 2007. In that same month, Moran was charged with three counts of bribery. A jury found Moran guilty of all three counts and he was sentenced to six months of probation and a $10,000 fine. Appeals in the matter concluded when the Pennsylvania Supreme Court upheld the conviction and sentence.

Moran’s central argument why he should not have been found guilty of bribery was that he would not have personally benefitted from payment of the $500,000 to the township. The Supreme Court rejected this argument, noting that the Pennsylvania Crimes Code broadly defines “benefit” to include situations where a public official solicits money, gain or advantage for “any other person or entity in whose welfare he is interested.” The definition of benefit in the Crimes Code, the court noted, is intended to include every possible type of offer made or designed to influence official action and to prohibit selling political endorsement or special influence.

The Supreme Court found that it was reasonable for the jury to find Moran’s conduct in soliciting the “…extra $500,000 from GP was not merely a continuance of the negotiation process or a savvy attempt to drive a hard bargain. Rather, this was a specific promise of preferential treatment to GP in the zoning process, in exchange for half a million dollars in excess of the purchase price.” In other words, under Pennsylvania law, Moran’s conduct was bribery.

« 9th Annual Rebecca Lukens Award Presented to Mary Ann Rossi
Want to modify your custody agreement? It could cost you… »